5 Reasons Why the Deployment Guitarist is Great

There’s always at least one person in every deployed unit who brings their guitar with them. Sometimes it’s because they want to learn how to play and decide their down time as the perfect opportunity to practice. Sometimes they just can’t part with their baby for 12 months.

Either way, you’ll find them hanging around the smoke shack playing for the masses. If they’re at the point where they’re willing to play for their squad in between missions, they’re probably pretty good at it. Here’s why:

5. They’ve got plenty of time to practice.

Contrary to popular belief, there actually is down time on a deployment. Which unit you’re serving in will determine how much time that is, but everyone can at least have a moment to breathe.

If the guitarist brought an acoustic guitar, they can play it whenever and wherever they feel like it.

If you start playing, others will stop what they’re doing — giving you even more free time. Just saying.

4. They learn to take requests.

There’s a handful of songs everyone who first picks up a guitar has to learn how to play. Iron Man, Smoke on the Water, Seven Nation Army, and eventually Stairway to Heaven. They’re kind of ‘rite of passage’ songs.

But not everyone on the deployment gets that and everyone will always request Free Bird.

But thankfully they’ll stop caring before the guitar solo comes up.

3. They play all genres.

When you first pick up a guitar, you’ll play what you know and play what you like. But the deployment guitarist, after taking requests from everyone, learns to play all sorts of genres of music. Especially if they find other gifted musicians or singers in the unit.

It’s always a great time when other musicians get together.

2. They’ll play to the battalion or just a handful of smokers.

An odd thing happens when command teams find artists in their unit. They’ll single them out and voluntell them to share their art with the unit. Normally, this never bothers them because they just love playing.

But more often than not, they’re usually in the smoke pit — just strumming away at whatever comes to mind.

And I’m just saying, from personal experience, it’s also very common in the aid station since the guitarist is often times a corpsman or medic.

1. They really do have the passion in their art.

If they’re willing to risk losing that money by having their guitar get damaged though out a deployment, play in front of their brothers-in-arms, risk ridicule if they suck, and still get out there and perform — they’ve got as much passion as any recording artist out there.

If they brought an electric guitar, oh yeah…they have passion. 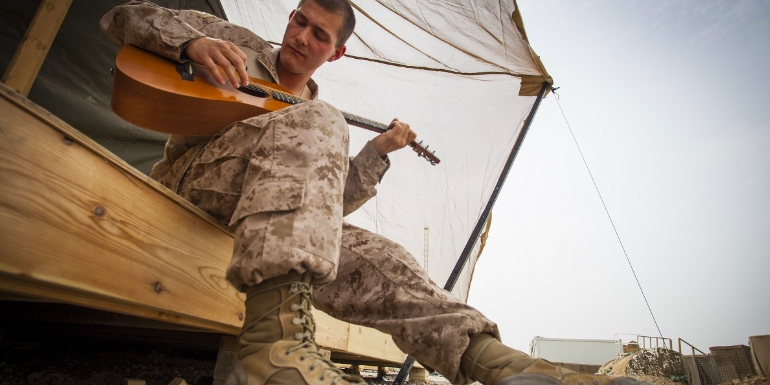