Although each Central Issuing Facility of each branch at each duty station as their own standard operating procedures, in general, they all follow a guideline of “if it’s touched a troop’s skin or it’s basically worthless, then the troop keeps it.” But if you stop and think about it, what doesn’t get dirty and worn just from regular use?

With that in mind, here’s a rundown of things that would be better off left in a troop’s hands as they head into the civilian world — or to their next duty station.

Here’s a fact: The only way to get comfortable in one of these sleeping systems is to strip butt-naked so your body heat is evenly distributed. Still want it back?

These things get nasty after they’ve soaked in so much body odor and sweat that it’s like CIF asking for your field socks back.

I mean, you guys really want it THAT bad…

As you can imagine, these directly touch your mouth. If you’re required to return it, that means others returned it before you. Now, we’re sure it’s been cleaned time and time again, but we still can’t help but wonder about what kind of nasty germs have lived on it.

It seems like every branch swaps out their service uniform faster than you can blink. Generally speaking, the military wants their old uniforms back before you can get a new set.

Just to toss salt on the already pointless wound, they’ll raise hell if the old uniform you’re turning in isn’t perfectly clean.. you know, for the next troop who definitely won’t be wearing it.

“Those would look so great as civilian attire!” said no veteran ever.

3. Duffel bags with your name stenciled on

Duffel bags are cheap. They’re just a bit of canvas made into a bag. Everyone in the military has the exact same O.D. green bag, so units ask troops to spray paint their name, last 4, and unit onto the bottom.

Here’s the problem: that paint isn’t coming off any time soon. Good luck trying to find another “Milzarski” in that that exact same unit after I leave.

Even if you don’t spray paint it, it’ll still get worn the hell out.

Instead of asking troops to turn in a partly-used first-aid kit, why not let them keep it and stash it in their vehicle in case of emergencies? Sure, it puts the military out a whole $85 (according to Amazon), but wouldn’t it be nice to have a bunch of medical supplies out there in the hands of people trained to use them?

What’s worse is when the CIF clerk gets hostile with you and questions you why parts are missing. Because, you know, we needed to save a life?

There’s one item that every troop holds dear above the rest — their poncho liner, affectionately called a “woobie.”

Troops sleep with it, it’s fairly cheap, the camo pattern is quickly outdated, and they’re perfect for emergency situations. Long after troops get out, if they managed to sneak one past supply, they’ll cuddle up with it on the couch and fondly recall their service.

READ NEXT: A DAY IN THE LIFE OF A CHOPPER PILOT IN VIETNAM 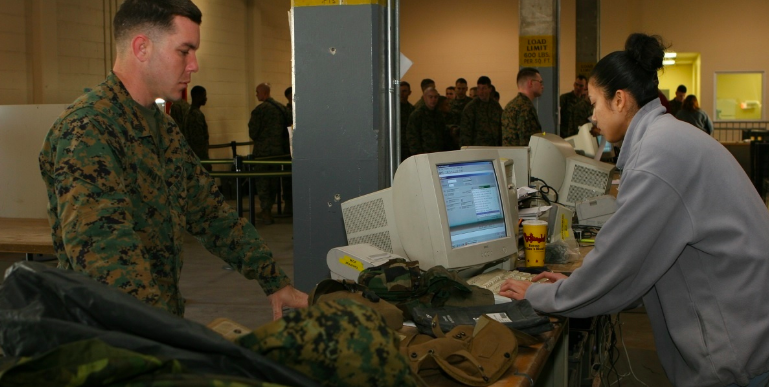 Article Name
6 Weird Things CIF Wants You to Return
Description
You get all kinds of awesome gear when you join the military. But for some reason CIF wants you to return some of the weirder things.
Author
Eric Milzarski
Publisher Name
We Are The Mighty