6 Types of People to Avoid at Your First Civilian Job

Your crusty ol’ Sergeant Major was partially right when he said that you’ll have a hard time out in the civilian world. Sure, it’s amazing to forget what 0500 is after setting your alarm clock to “8 am” and the overtime pay is nice, but everything would be a lot better if you didn’t have to deal with so many civilians.

Not all of them are bad, though. There are plenty of civilians who could have fit right into any squad if their career had taken a different turn, but there are plenty others that will always irk veterans.

If they were troops, you could yell at them until you’re blue in the face or make them do push-ups until you get tired, but, sadly, that kind of behavior only nets you weird looks. So, we think it’s best just to avoid interacting with the following low-lives.

The biggest hurdle you’ll face is the utter lack of f*cks given about professionalism and the need to get things done right the first time. Your “until mission complete” mentality is entirely at odds with the folks who get paid by the hour regardless.

In some civilian jobs, there isn’t any real incentive to go that extra mile. Those who slack off still get paid on time. If you try to cover for their laziness, you’ll end up doing double work for none of the extra pay. It’s a trap.

If only civilians wet themselves at the sight of a knife-hand. Then things would get moving again.

2. The jokers that can’t take a joke

Troops and veterans have a wicked sense of humor. In one moment, we’re prim and proper — professional enough to show off to your grandmother. In the next, we open our mouths and tell rotten jokes that’d make grandma blush.

That’s entirely how we show our love for one another — by belittling every bit of someone and expecting them to do the same in return. But civilians can’t throw shade like veterans can. You make a tiny, seemingly innocent remark, like how their hairline is so jacked up that they should just cut their loses and shave it bald and suddenly, you find yourself dealing with HR.

The “relax, it was just a joke” doesn’t seem to fly with civilian bosses.

Being in the military, you know exactly where you stack up against another person professionally. Your rank is right there on your chest, collar, or sleeve. If it’s the same, you go to time in grade or service. If those are similar, you move to your medals, awards, and so on. Respect is earned and rewarded accordingly.

Most people in the civilian world are so caught up with trying to make themselves look better that they’ll confuse what they’ve done with where they stand comparatively. The fact that some dude’s dad just bought a new yacht doesn’t mean jack sh*t if you’re both sitting in same-sized cubicles. Nothing outside of work should matter during work but, apparently, the one-upper thinks it does.

“Oh, you went on a camping trip and didn’t have electricity for a night? That’s cute.”

“One team, one fight” is the mantra of the military. If one person fails, everyone fails. If one person succeeds, everyone succeeds. We’re all in the same foxhole, wearing the same shade of green, fighting for the same flag. Being a team player isn’t something that comes naturally for some folks.

The drive for personal success outweighs the need to get things done for these guys. They’ll beg, borrow, steal, or lie to anyone if it means they can get that $10 raise and they’ll never look down to see every shoulder they’re standing on. To make things worse, they’re also the same type that believes that the world revolves around them and they’re owed the right to do whatever misdeeds they commit onto others.

Back in the day, you’d learn real quick why that’s a dumb idea. Ask anyone who’s ever been the reason for a 4-day weekend recall formation.

Troops come from all backgrounds and make up a fairly balanced slice of the American population. Personal identity, race, religion, sex, orientation, political affiliation, and whatever else — none of that matters while you’re on duty and trying to complete the mission. Those kind of talks are best kept for when you’re out of uniform and can realistically not have duty on your mind.

Yet, in the minds of these civilians, veterans are often seen as some sort of subject matter expert for all things military. I couldn’t tell you what the other company in my battalion was doing while I was still in the Army and yet people will press you on whether it was a just idea to implement sanctions on wherever.

Just smile, nod, and mess with them.

If you mess up in the military, you take it on the chin like an adult and you drive on. You’re late? Own up to your mistake or be honest about why you’re late. You may get reprimanded, but no one really cares after that. Just get back to the mission.

There is no magical excuse that will immediately absolve anyone of any of their shortcomings — but goddamn will these as*holes try to find it. Problem with me? It was the other guy. Problem with my performance? Must have been a computer problem. You get the point. These types will always let you down and never seek to improve themselves because they’ll honestly believe their own BS.

These are probably the same guys to say to you because you’re a vet “I would have joined, but…”

READ NEXT: 5 REASONS WHY YOU GOTTA LOVE THE COMBAT MUSTACHE 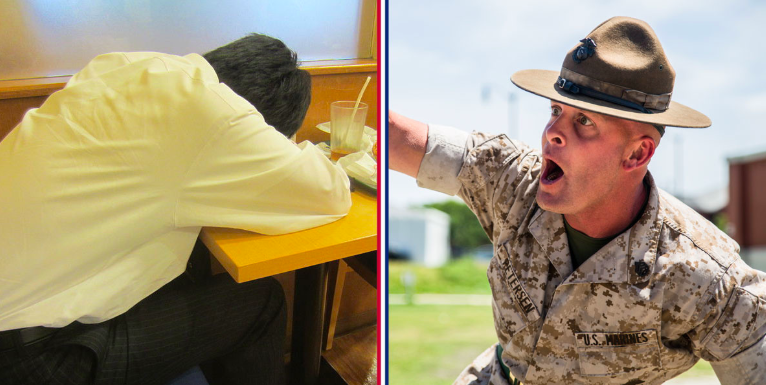