The moments leading up to a bloody engagement are frightening. Troops, knowing the end may be near, stand and wonder what lies beyond the next bend.

Every so often, Hollywood recreates this moment on film. Invariably, we see our hero take to ramparts to deliver a rousing speech. It takes some well-written words of encouragement to lower troops’ stress levels and get them ready for the fight.

These are a few of the best battle speeches to ever hit the screen.

Related: 7 of the most overused lines in war movies

Directed by Cy Endfield, this classic film follows a group of outnumbered Welsh infantrymen as they defend a hospital and supply dump for 12 long hours from a massive force of Zulu warriors.

In this case, the battle speech was more like a war song. Each man belts out lyrics to grant them the courage they need to take on the brutal, blade-wielding charge.

6. The Lord of the Rings: The Return of the King

Directed by Peter Jackson, the third installment of this juggernaut trilogy dominated the Hollywood box offices for weeks on end and, hopefully, taught a lesson to a few military leaders on how to deliver speeches to their troops.

Directed and starring Mel Gibson, this Oscar-winning film centers around one poor Scotsman as he rallies a country to fight against English oppression — and it all started with this famous battle speech.

It’s a good thing that, in modern war, we don’t to ride into battle on horseback or clash with enemy swords. However, if we did, we’d want to hear words of encouragement from a general who isn’t afraid to fight alongside his men.

If the earth is ever attacked by aliens, someone better revive this exceptional battle speech word-for-word to rally up the troops. The world might feel like it’s legitimately going to end, but it only takes a few minutes of a truly inspiring speech to get everyone on the same patriotic page.

Based on the life of the legendary Gen. George Patton, the opening speech to 1970’s Patton is one of the best pieces of motivational dialogue ever recorded on film.

Also Read: 6 of the most disappointing military movies of all time

300 follows a small squad of elite Spartan warriors, led by King Leonidas, as they stand their ground against a massive Persian army. After the King’s death, a Spartan named Dilios delivers a speech that motivates the crap out of the rest of the men to take out the remaining Persian army. 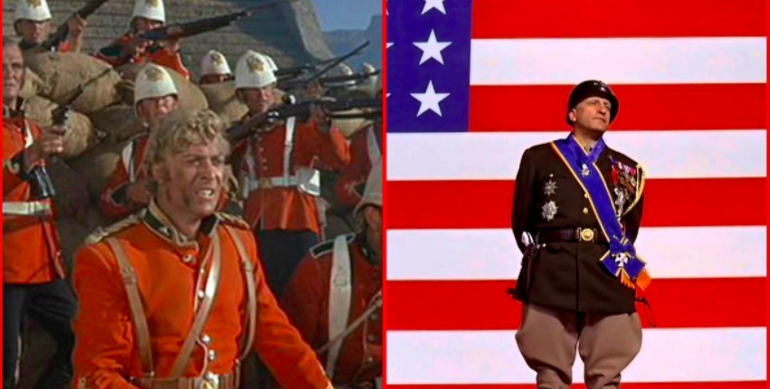 Article Name
The 7 Best Military Movie Battle Speeches
Description
Hollywood has been known to get things wrong when it comes to military movies. But sometimes they get it right. Here are the 7 best military movie battle speeches ever.
Author
Tim Kirkpatrick
Publisher Name
We Are The Mighty