The night is dark and cold in the French countryside. The sky is moonless and your headlights are dimmed to hide you from enemy planes. You’ve never driven this route before, but the troops at the front desperately need the supplies you’re carrying, so you hurtle down the bumpy dirt road at 60 mph in your 2.5-ton truck. As the sounds of battle ahead grow louder, you realize you’re nearing your destination; and greater danger.

Overhead, the thunderous roar of airplane engines add to the cacophony of gunfire. You pray that the planes are friendly and that you won’t be strafed or bombed, and drive on into the night. 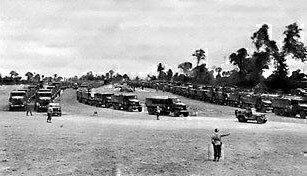 To streamline the flow of supplies, two one-way routes were utilized between the port at Cherbourg to the forward logistics base at Chartres, near Paris. The northern route brought supplies to the front while the southern route was used by returning trucks. These roads were closed to civilian vehicles and both the trucks and the route were marked with red balls. Outside of the designated route, the red balls also gave the trucks priority on regular roads. 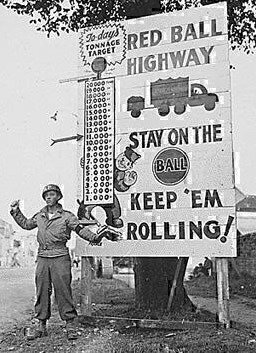 An MP waves on a Red Ball Express convoy next to a sign marking the route (Photo from the U.S. National Archives and Records Administration)

At the height of its operation, the Red Ball Express consisted of 5,958 vehicles carrying about 12,500 tons of supplies a day. In order to staff this massive logistical effort, soldiers were drawn from other support units and trained as long-haul drivers. For some, it was their first experience behind the wheel. A majority of these men came from the Quartermaster Corps and 75% of Red Ball Express drivers were African-American. 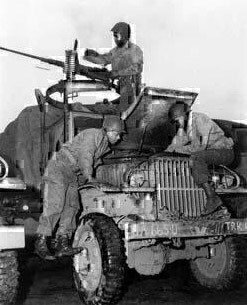 One such driver was James Rookard who was just a teenager when he was assigned as a Red Ball Express driver. “I’ve driven when I couldn’t hardly see, just by instinct. You sort of feel the road,” Rookard recalled. “There were dead bodies and dead horses on the highways after bombs dropped. I was scared, but I did my job, hoping for the best.” In the midst of all the danger, Rookard and other drivers endured a 54-hour long round trip to the front and back with very little rest between trips. 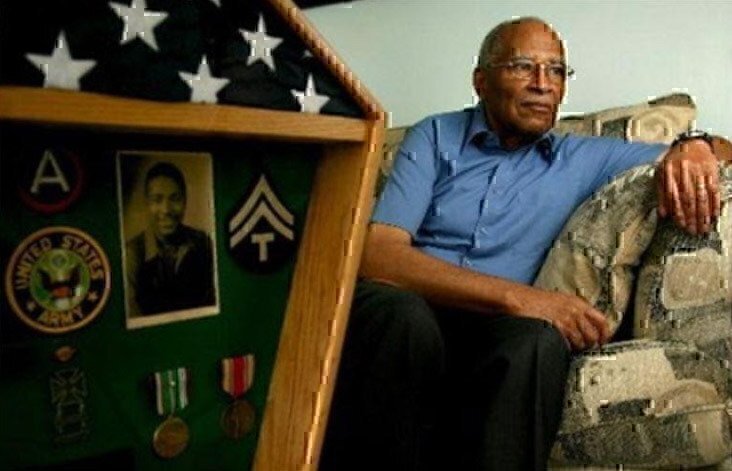 To increase their efficiency, drivers often removed the governors from their carburetors which normally restricted their speed to 56 mph. Some drivers even learned to switch seats with their relief driver on the move. “When General Patton said for you to be there, you were there if you had to drive all night,” Rookard attested. The drivers of the Red Ball Express had an important job to do and they got it done. 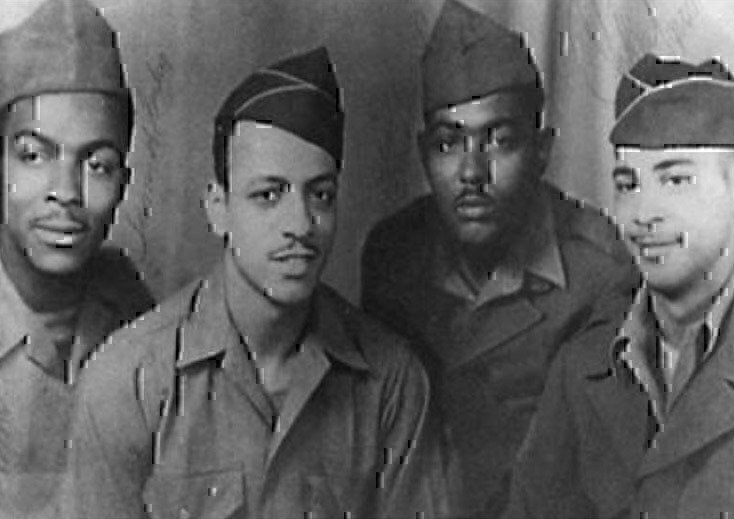 Their exemplary performance drew the attention and respect of Allied commanders. “Few who saw them will ever forget the enthusiasm of the Negro drivers, hell-bent whatever the risk, to get Patton his supplies,” one British brigade commander wrote. Even Hollywood took notice, and in 1952, the film Red Ball Express was released. However, the film was not without controversy. 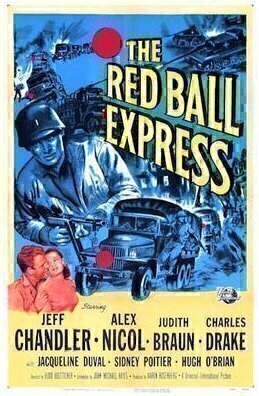 During production, the Department of Defense sent a letter to director Budd Boetticher and Universal insisting that the presentation of race relations be modified and “that the positive angle be emphasized.” Boetticher was displeased with the interference.

In 1979, Boetticher explained, “The Army wouldn’t let us tell the truth about the black troops because the government figured they were expendable. Our government didn’t want to admit they were kamikaze pilots. They figured if one out of ten trucks got through, they’d save Patton and his tanks.” 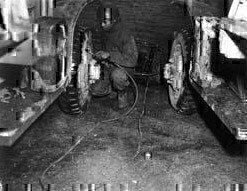 A soldier fills a tire with air alongside the Red Ball Express highway (Photo from the U.S. Army Transportation Museum)

The men of the Red Ball Express were given an enormous task. Only through their enthusiasm, determination, and many sleepless nights were they able to bring their comrades at the front what they needed to fight. The next time you watch Patton, remember the brave men who brought him the supplies to keep his tanks rolling. After all, bullets don’t fly without supply.

Becoming a Truck Driver: Getting Your CDL

The 66 Religious Symbols the VA Will Put on Tombstones