Why the Cook Should Be Your Best Friend in the Military

There are three people you should always be friends with: The cook. The medic (or Corpsman). And whatever the MOS of the person repeating the phrase.

Everyone in the military serves a purpose in the grand scheme of things, but this week we’ll break down why the cook always belongs on the top of that list.

This is first in a series that will cover the benefits, both obvious and subtle, of befriending service members of another MOS. Stay tuned for more! Who knows? Your MOS might be next!

Just a fact of life. The average human needs 2,000 calories a day to stay functional — and that number is far higher for people with an active lifestyle, like troops.

There’s only a certain amount of MREs you (and your digestive tract) can take. That’s where the chef comes in — with fresh food.

Even on the other end of the spectrum, if you’re so POGgy that all you eat is fast food — well…you do you. .

“But they always serve those gross eggs that come in plastic bags!” the uninformed are typing furiously in the comment section.

This is true. Not denying that they do serve mass quantities of food that can only be eaten doused in sauce. But take a look at the stuff they can make when they have the time, like on holidays or “best chef” competitions. Even that awkward E-2 you only ever see in the smoke pit can probably pull off some really impressive work those days.

Just brings up the question, why don’t they do this every day? Or let the regular Joes in to eat the food?

4. They can get you more of the good food

They do have to hold on portion sizes during meal rushes to make sure everyone can get something to eat. It’s just the way things go if you’re told you have 400 pieces of bacon and 100 people to feed. You’d logically give four pieces to everyone. But the cooks know that there won’t be 100 people who want bacon.

Once they know that it’s cool, they will definitely toss those extra bacon strips your way.

You know you want this to be the recommended serving size of bacon.

3. They have access to the real deployment gold: Rip-Its, muffins, beef jerky, etc.

The weirdest thing happens on deployment. Money becomes meaningless (because everyone has expendable cash and nothing to spend it on) and minor things like Rip-Its, despite being half the size of the same ones they sell at the dollar store, have more value and trading power than the 5o cents it’s probably worth.

Why barter for gold when you could go to the goldmine itself?

The cooks stockpile the stuff people are willing to trade Playstations for.

What happens when you’re their bro

2. They can get you food on the off-hours

If you’ve ever worked KP, you will probably notice the bullsh*t that is all of the leftover food being tossed. Just trays of bacon being thrown directly into the trashcan. Most cooks are just like every other troop: plenty of them would rather save that bacon for their bros than see it in a landfill.

On top of that, there’s this weird thing about cooks. Most actually enjoy cooking — on and off duty. They may also just whip you up something in the barracks kitchen if you ask them nicely.

And all that bacon can be yours.

1. They will make you the food you actually want

Remember those disgusting bagged eggs from earlier in this article? Cooks can make you a real egg omelet if you ask them. Same goes for everything else in the “made to order” lines.

But the real kicker are those little comment suggestion cards they always have at the end of the dining hall. Not to blow their secret, but most cooks have a hard time coming up with countless menu options day in/day out, so they’ll stick to a schedule or a guide that has been passed down since god knows when.

If you say to your cook friend, “Hey man, I found this recipe for some Brazilian food. Looks easy enough,” they’ll likely give it a shot — and you’ll feast at “Brazilian Day” in the chow hall sooner or later.

Seriously. Brazilian food is so easy to make. Why hasn’t this become a thing? 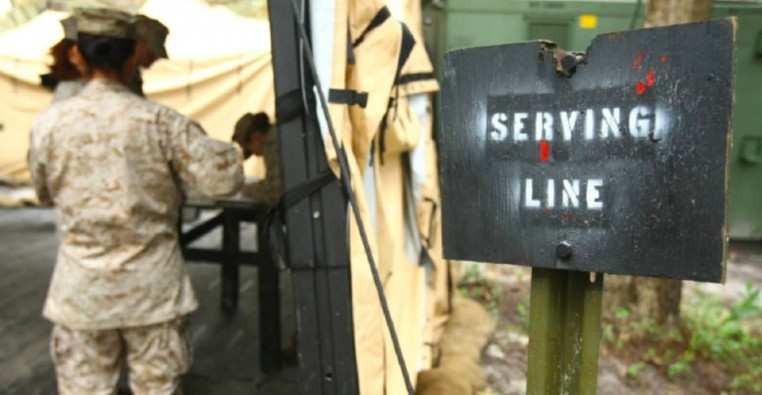 Article Name
Why The Cook Should Be Your Best Friend in the Military
Description
Every position and MOS in the military serves a distinct purpose as part of the greater machine. But this is why you must make sure to be best friends with the cook.
Author
Eric Milzarski
Publisher Name
We Are The Mighty