This article was written by Blake Stilwell and originally appeared on WeAreTheMighty.com

Every red-blooded American knows the story of the Battles of Lexington and Concord and the “Shot Heard ‘Round the World” that was fired there. But shortly after, one of the most incredible stories of heroism in the entire war – maybe even American history – happened just a few miles away.

Samuel Whittemore served in the Queen Dragoons, dominating both the French and Indians during the French and Indian War and the earlier King George’s War. Born in England in 1695, he was still beating down Frenchmen at age 64. In the American west, he battled native warriors in the Indian Wars of 1763, fought after the French withdrawal.

When those wars ended, the battle-hardened dragoon officer decided to stay in the new land for which he fought so many times. Whittemore settled in the Massachusetts Colony, and like many there, soon came to believe in American Independence.

So when the shots started firing at Lexington and Concord in 1775, the old veteran was firmly for the American cause. From his home in Menotomy, Massachusetts, he watched a column of 1,400 British reinforcements make their way to the fighting. Then he heard two columns of British were retreating toward Menotomy – and they were burning homes along the way. 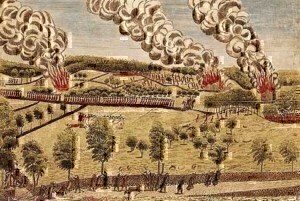 Whittemore, now 80 years old, grabbed all his weapons – dueling pistols, an old captured French cutlass, powder horn, musketballs, and rifle – in a Rambo-like Revolutionary War montage of potential destruction. He then marched out to a position overlooking the road from Lexington.

He stared down the 47th Regiment of Foot as other minutemen started to open up on the British troops. Whittemore waited until the Brits were directly in front of him, then took on the entire regiment, all by himself.

The patriot capped three Redcoats with his firearms at point blank range, but not having time to reload he drew his sword and started slashing at the oncoming bayonets instead. One soldier shot Whittemore in the face, finally bringing the old man down… and yet he still tried to get back up. 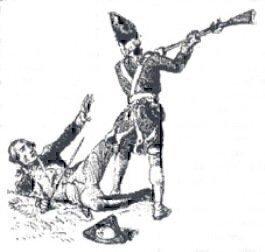 It took a lot more than one Redcoat to bring him down. (Revolutionary War Archives)

Redcoats swarmed the minuteman. A swift buttstroke and multiple bayonet stabs convinced them the old man was dead and the British continued on, leaving Whittemore bleeding in the road. Their fight through Menotomy cost them 40 dead and 80 wounded. When the smoke cleared, the townspeople went to collect Whittemore’s body.

What they found was the old veteran reloading his musket, getting ready to go again. They carried him to a local tavern where doctors were tending to the wounded. Believing the old dragoon captain suffered mortal wounds, doctors didn’t tend them, they had him sent home to die with his family.

Except he didn’t die then, either. Death was afraid to come for Samuel Whittemore for another 18 years. He died at age 98 in February 1793, the oldest colonial Revolutionary War combatant and recipient of the best memorial marker of all time. 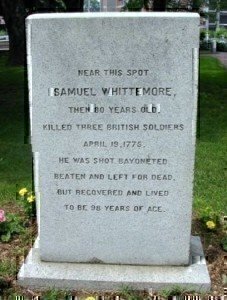