What’s a College Degree Worth in Today’s Dollars?

You’re back and ready to take the next step of your newly acquired civilian life by the horns. We all know that the best things in life aren’t free: your house, freedom and education. Although your GI Bill may cover most, if not all, of your tuition, is getting that college degree really worth the time and effort? The answer: You can make it worth it.

According to a study conducted by the Pew Research Center in 2014, the cost of not going to college is on the rise. The value of a high school diploma is being trumped by degrees of higher education by as much as $1 million over a lifetime of work. But there’s more to it than just deciding to go, attending and graduating college. It’s about deciding what degree to pursue and knowing how you’ll be able to use your degree, because all bachelor’s degrees are not created equal.

For example, a newly graduated healthcare major entering an entry-level position can expect to make about $41,000 annually, as opposed to an arts, humanities or liberal arts graduate entering the workforce. Those individuals are looking at an annual starting salary of $29,000, according to Georgetown University Center on Education and the Workforce’s “The Economic Value of College Majors.” 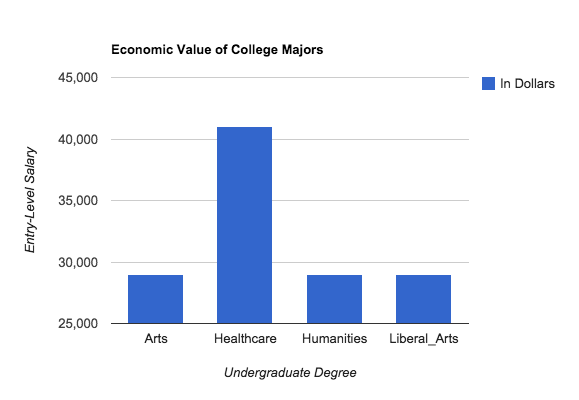 The difference in lifetime wages between a college graduate and that of a high school graduate is $1 million. But that’s just going to college. The difference in lifetime wages of the highest-paying versus the lowest-paying college majors is close to $3.4 million, according to a MarketWatch article published in May 2015. Business majors and science, technology, engineering and mathematics (STEM) majors top the charts for the highest-paid graduates.

Forbes published an article earlier this year stating five reasons why college was still worth it. Explanations included cost, happiness and work opportunities. Cost may not be as big of a factor for you, and the happiness and access to services, resources and people you gain will likely far outweigh the price tag of your education.

Don’t be worried about name brand schools, either, when college hunting. Forbes explained that alma mater names only matter in certain cases, like geographical areas. Companies and businesses familiar with the local schools will most likely hire those graduates since they know the quality of the education students receive. Other than that, it’s all about who you know and what you know.

Talking to professionals already in your desired career field is beneficial. Seeing where they went to school and the approach they took in reaching their goals could better guide you in your future decision-making, according to Forbes. (Read: Apprenticeships Aren’t Dead: How to Learn the Most About a Future Career)

The piece of paper with a gold seal with your name on it isn’t your golden ticket to earning stacks of green paper. In the end, employers are looking at your skill set and experiences that would help the company and make you an asset to their business. But not going to college could potentially end up costing you more.